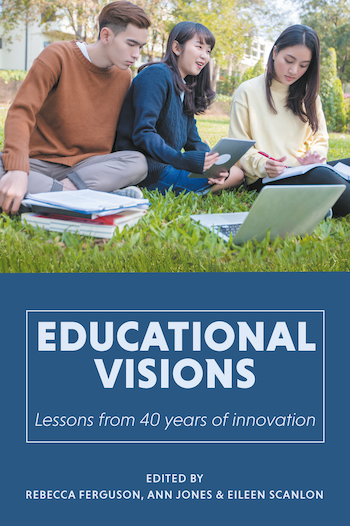 Chapter from the book: Ferguson, R et al. 2019. Educational visions: The lessons from 40 years of innovation.

This chapter discusses some of the Computer Aided Learning (CAL) Research Group’s early work, focusing on our attempts to understand learners’ practices so that teaching could be adapted to meet learners’ needs. The chapter describes and discusses examples of CALRG research from the group’s early days to the start of the 2000s. One reason for doing this is to explore the extent to which there has been continuity in the group’s work over time. In the chapter we argue that the group’s motivation, aims, ethos and overall approach have remained similar during its forty-year existence. The chapter draws on the Beyond Prototypes framework, described in Chapter 1 of this book, to frame some of the discussion, in particular focusing on policy and environment. Analysis of the case studies that led to the development of the framework suggest that Technology Enhanced Learning (TEL) needs to be understood as a ‘complex’, made up of a series of elements that need to be considered together. The chapter also uses the three themes of the group’s first conference to provide an organising framework for the discussion. The three themes from that first conference are firstly, models of learning; secondly, methods for studying learning and thirdly, institutional research.